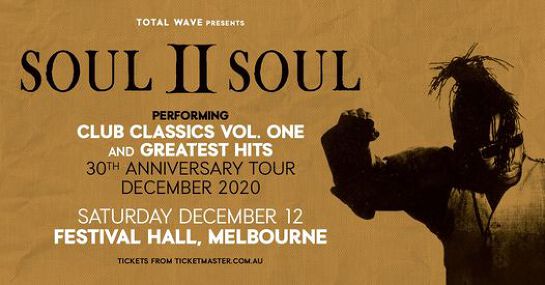 For everyone’s safety, Total Wave has postponed the Soul II Soul Australia Tour until December 2020, with the event previously at the Palais Theatre now being held at Festivsl Hall on Saturday 12th December 2020.

Over the next week, all current account holders will be contacted by Ticketmaster regarding their seating allocation. The Festival Hall show will now be an 18+ yr only event, and you will also have the option to maintain a seated allocation or relocate to the GA standing floor if you prefer.

There are a limited amount of seats available at Festival Hall

( In front of stage only )so please act promptly should you wish to maintain a seat, and keep this in mind to speak with the customer service representative that reaches out to you. Alternatively, you can email Ticketmaster at - ticketmaster.com.au/support.

We will be here when this is all over and look forward to getting ‘Back To Life, Back To Reality’ with you all 

Soul II Soul had immediate chart success across the globe in 1989 with the release of Keep On Movin’ featuring Caron Wheeler on vocals.

Their debut album Club Classics Vol 1 would follow suit going multi-platinum in both the UK and the US selling millions of copies worldwide. The next single from the album Back to Life (However Do You Want Me) would soar even higher hitting No 1 in many countries across the globe as well as picking up a Grammy in the US.

Multiple albums and singles would follow over the next decade cementing the bands worldwide following with a succession of chart successes.

A classic album, a classic tour, this is a true do not miss a musical moment!

Soul II Soul will be appearing at:

“A HAPPY FACE A THUMPIN’ BASS FOR A LOVING RACE”

Prohibited Items: No video, audio or professional photography unless stated otherwise by the promoter. Tickets can only be purchased via the Ticketmaster website or Ticketmaster App* *Accessible ticket options excluded and are still available via the Accessible Seating Line. Mobile Tickets are like Print-at-Home tickets but instead of having to print off the tickets yourself, you can just show the barcode on your mobile phone. It is the easiest way to access tickets to your events. For more information visit Ticketmaster.com.au/mobiletickets