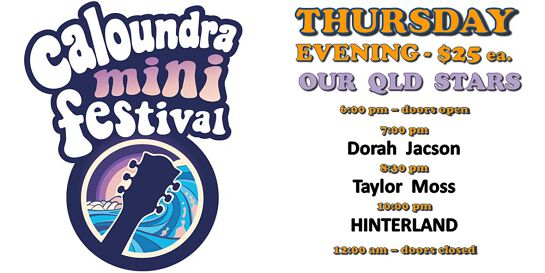 Caloundra's 2020 Music Festival (this year) is a MINI MUSIC FEST, and the KINGS CLUB is exclusively at Whispers Cocktail Bar & Lounge.

What Happened to the Traditional CMF ?

As a large scale event, the organisers and Sunshine Coast Council have elected to postpone the Caloundra Music Festival in its previous format. This year, the CMF is being launched as the Caloundra Mini (Music) Festival, and the CMF KINGS CLUB is exclusively at Whispers Cocktail Bar & Lounge in Caloundra.

Tickets are available per Session, held either in the afternoon or evening. Please see below for more information.

$25.00 per ticket for the Thursday night session, plus booking fees (and GST if applicable), covers three bands on the evening, each with a one (1) hour performance, totaling three (3) hours of entertainment over the course of the evening.

Your ticket also INCLUDES A COMPLIMENTARY DRINK beer or cider or soft drink (see terms below). Food is available to purchase during the session.

Doors open at 6:00pm for dinner and pre-drinks, with the live entertainment as follows

The Sunshine Coaster first performed solo around the region for over a year, and throughout this time she captivated her audiences, and began gaining an admirable following. Now with a band behind her, she’s been able to take her performance to the next level, with the power and drive of the drums and bass, and the soaring lead guitar lines and ambient details bringing out the raw emotion and passion behind the songs she’s always aspired to express.

In February 2019, she released her debut single ‘Away’, which quickly began receiving rave reviews. A few weeks later, she was given the opportunity to open at Big Pineapple Music Festival, where she and her band played on the main stage in May.

Since then, the songsmith has played shows and festivals around the region with her band, released her next single ‘Sinking’, and is now set to surge into 2020 with a new single and EP on the way.

Taylor Moss has come a long way in a short time, but this exciting artist has found her stride in the Country arena. Born in the sleepy NSW seaside town of Ulladulla, Moss now calls Queensland’s Sunshine Coast her home.

The 23-year-old first entered a recording studio at the tender age of 15 and has never looked back. The past few years have seen her achievements mount after getting her break at the Urban Country Music Festival when she took out the first place in the event’s talent quest. After a couple of years continuing to hone her craft, Moss continued her ascent when she was announced as a finalist in the prestigious Toyota Star Maker competition at the Tamworth Country Music Festival.

On the back of this achievement, Moss toured extensively for 12 months before teaming up with Golden Guitar-winning producer Matt Fell and set her sights on a serious career as a professional recording artist. In late 2017 she released new music independently that turned heads and pricked up ears around Australia, opening many doors that included a support spot with Jimmy Barnes and performances at The Gympie Music Muster along with a return to Tamworth.

Flash forward and Moss renewed her partnership with Fell to produce her most polished music to date. There is little doubt you’ll be hearing the name Taylor Moss for many years to come.

- COMPLIMENTARY DRINK ON ARRIVAL - see ticket and Terms for details.

- FOOD AND DRINKS AVAILABLE TO PURCHASE THROUGHOUT SESSION

Each Session Features 3 Bands, over 5.5 hours, one hour per band. Available Sessions at Whispers Cocktail Br & Lounge are :

Your seating has been arranged to comply with Social Distancing requirements. Note that all ticket sales are sold in "seating blocks" per table to ensure patrons maintain their "social bubble groups", to prevent intermingling and so that Social Distancing protocols are in place. You are not permitted to move seats or your seating position.

Please note that there is NO DANCING within the venue in accordance with current Directives from QLD Health.

On the evening, you will be required to adhere to the directives from QLD Health and other agencies. To ensure everyone has a great time, please follow the directions of staff on the evening.

Each ticketholder is entitled to one (1) complimentary mid-strength Asahi Souki Beer, or Somersby Apple Cider, or soft drink, on entry to the venue upon presentation of their valid ticket. Limit of one (1) of either drink per person per session, and cannot be redeemed for cash or other drink/s.