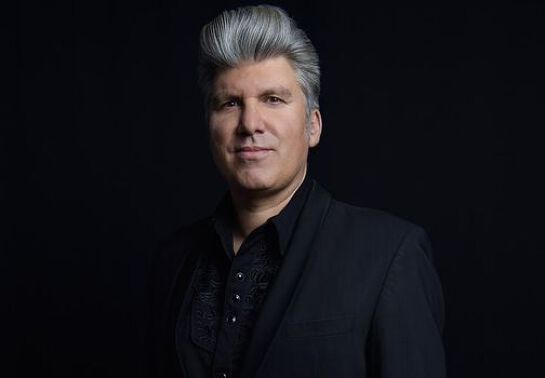 Cabaret Festival: King of the Crooners

Internationally acclaimed singer, songwriter and entertainer Michael Simic AKA Mikelangelo invites us on a sultry, intoxicating musical journey through the history of the crooner in popular music.

a. A singer, typically a male one, who sings love songs

b. To lull by singing or humming in a soft, soothing voice

d. A drink that is less alcoholic than the one you are currently drinking

With the invention of the microphone, singers no longer needed a huge set of lungs to reach the back row; they could whisper and send a shiver down your spine. This new intimate vocal style wasn’t to everyone’s taste, the word crooner was used by some as a term of abuse, and even singers like Bing Crosby and Frank Sinatra claimed they were not crooners.

But it didn’t take long for crooning to woo the world, make its way into the popular imagination and become influential on singing styles in almost every genre of music. Michael Simic croons stripped back and intimate versions of some his favourites from the last 100 years, from Bing to Dino, Elvis to Bowie, Sam Cooke, Ricky Nelson, Bryan Ferry, Chris Isaak and more; including a selection of his original songs that prove that the art of the crooner is not a thing of the past. With his velvet voice and his trusty guitar, Michael Simic takes us deep into the seductive, reflective and gentler side of some of the greatest male artists of the 20th century.

"… an all-consuming magnetism, any time spent in his company is an absolute joy." **** FEST Magazine (UK)